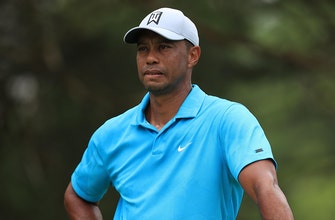 Tiger Woods bookended his return to the PGA Tour with a pair of birdies, but largely had an up-and-down day in the opening round of the Memorial Tournament on Thursday.

It’s been quiet watching @TigerWoods but these kiddos lent some voice and 🐅 was very appreciative. pic.twitter.com/Tz10SHqwY4

Tony Finau ended the round as the leader at -6, while Bryson DeChambeau stole the show with a monster drive at No. 1 after making the turn.

But, as he is wont to do, Tiger drew most of the attention in Dublin, Ohio, and started his day with a little bit of showmanship on the warmup green.

He almost made it. 🐅 pic.twitter.com/GQQZUUJnh3

Playing at Muirfield Village, Tiger returned for his first competitive round since February’s Genesis Invitational in Los Angeles.

The 15-time major champion didn’t disappoint in the early-going, slotting home birdies on the first and third to go two-under early.

The return of @TigerWoods 💪

He birdies the first at the @MemorialGolf.pic.twitter.com/oY5CUZcqfD

That momentum faded, though, as Tiger gave two back before making the turn. He followed up a birdie on the par-5 15th with a bogey on 16 but closed his round with a birdie on 18 to finish -1 and tied for 18th.

The highlight of the day, meanwhile, belonged to DeChambeau, who mashed a drive an astonishing 423 yards on the first hole after making the turn.

Despite the fireworks show, DeChambeau finished the round +1 for the day and tied for 42nd.

Alone atop the leaderboard, Finau dialed in six birdies on the back nine to bring his first-round score to -6.

There’s a fairly dense crowd behind Finau, with Ryan Palmer one stroke back in second, Brendan Steele and Gary Woodland tied at -4, and a trio of golfers tied for third at -3.

Yet with his birdie on 18 bringing him under par for the day, history is favoring Tiger.

Tiger Woods shot a 1-under-71 in the 1st round of the Memorial Tournament today.

In each of his 5 career wins at the Memorial, he has shot under par in the 1st round.

This is also the 12th time Woods has been under par after the 1st round at the Memorial in his career. pic.twitter.com/9EM9UCj9QA

It truly looks to be anybody’s game at Muirfield, with FOXBet’s insights tabbing Finau as the favorite to win outright at +650 following Thursday’s action.