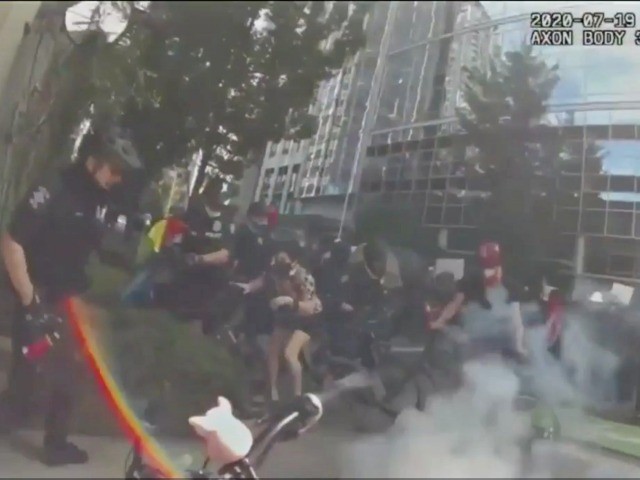 The Seattle Police Department declared a riot and arrested 16 people after “explosives” were thrown at officers when a protest turned violent in the city’s Capitol Hill neighborhood on Saturday.

Up to 1,000 protesters gathered about 2 p.m. Saturday for a peaceful march in solidarity with unrest and violent demonstrations in Portland. By 4 p.m., crowds had broken away from the protest, setting fires to construction trailers at the Juvenile Detention Center and attacking camera crews. […]

Police reported multiple explosions in the area and multiple fires, including one inside the East Precinct, where rioters breached a security fence to vandalize the building. Police are investigating “possible explosive damage” to the walls of the East Precinct and more explosives being thrown at police.

Seattle police said the protesters were arrested for assaults on officers, obstruction, and failure to disperse. Prior to announcing the arrests, police shared a photo of flammable objects being hurled at officers.

Update: 16 arrests for assault on officers, obstruction and failure to disperse.

Q13FOX correspondent Simone Del Rosario and others shared photos and video of protesters clashing with officers, along with images of heavily damaged buildings in the area.

Here’s a look from behind the police. Lots of colors in the air as police push people back onto Broadway. #Q13FOX pic.twitter.com/Btl4yTvxYE

Shortly after, Q13FOX reporter Brandi Kruse also shared footage of a nearby Starbucks, which was destroyed after it was set ablaze.

Video of Starbucks that was destroyed on 12th Avenue in Seattle. I’ve been here many times and have friends who live near by. The nicest baristas. I’m glad it was closed. #q13fox #seattleprotest pic.twitter.com/HG5Dy7xkk6

Unrest in Seattle comes after President Donald Trump sent tactical border officers to the city on Thursday in an effort quell soaring crime in Democrat-controlled cities across the United States.

The Special Response Team is similar to tactical teams operating in Portland, where violence and protests have raged for nearly eight weeks in the Oregon city. Federal agents have been in Portland for most of July. […]

Agents for the Special Response Team operate under the umbrella of U.S. Customs and Border Protection, the Times reported. They are typically deployed for intense law enforcement operations. […]

Mike Solan, president of the Seattle Police Officers Guild, told KIRO-TV that it was appropriate to seek help from the federal government.

Speaking to the New York Times, Seattle Mayor Jenny Durkan (D) said she spoke with acting Homeland Security Secretary Chad Wolf, who told her that the federal government would not be sending additional officers before communicating with municipal leaders.

DHS spokesperson Alexei Woltornist said it would be sending fewer agents to Seattle than Portland, which has been plagued by ongoing riots.

Earlier this month police cleared the “Capitol Hill Occupied Protest” zone after two fatal shootings. A group had occupied several blocks around a park for about two weeks following standoffs and clashes that were part of the nationwide unrest over the killing of George Floyd in Minneapolis.

Prior to Saturday’s protests Seattle Police Chief Carmen Best had announced officers would be armed with pepper spray and other weapons, promising officers would not use tear gas and urging demonstrators to remain peaceful.

“In the spirit of offering trust and full transparency, I want to advise you that SPD officers will be carrying pepper spray and blast balls today, as would be typical for events that carry potential to include violence,” Best said.

The temporary restraining order halts the law that the Seattle City Council passed unanimously last month after confrontations that have largely been peaceful but were occasionally marked by violence, looting and highway shutdowns. The law intended to de-escalate tensions between police and demonstrators was set to take effect on Sunday.

But the U.S. Department of Justice, citing Seattle’s longstanding police consent decree, successfully argued that banning the use of crowd control weapons could actually lead to more police use of force, leaving them only with more deadly weapons.

The Associated Press contributed to this report.