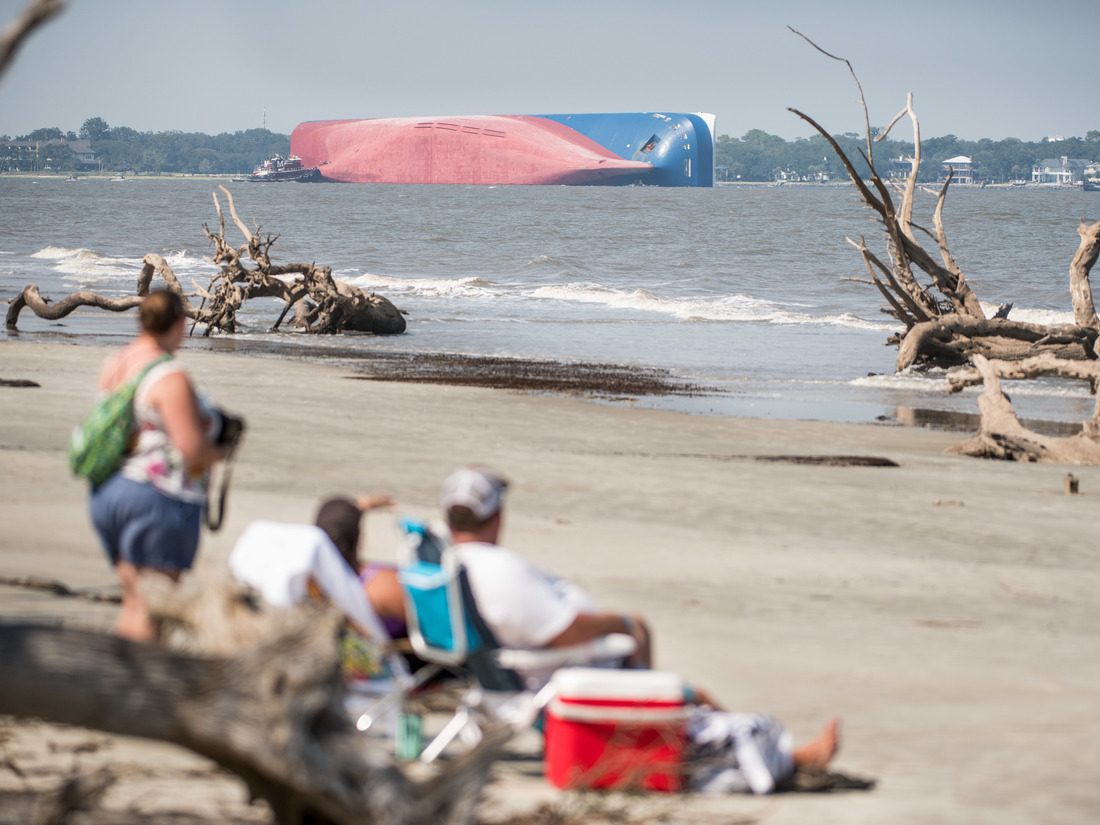 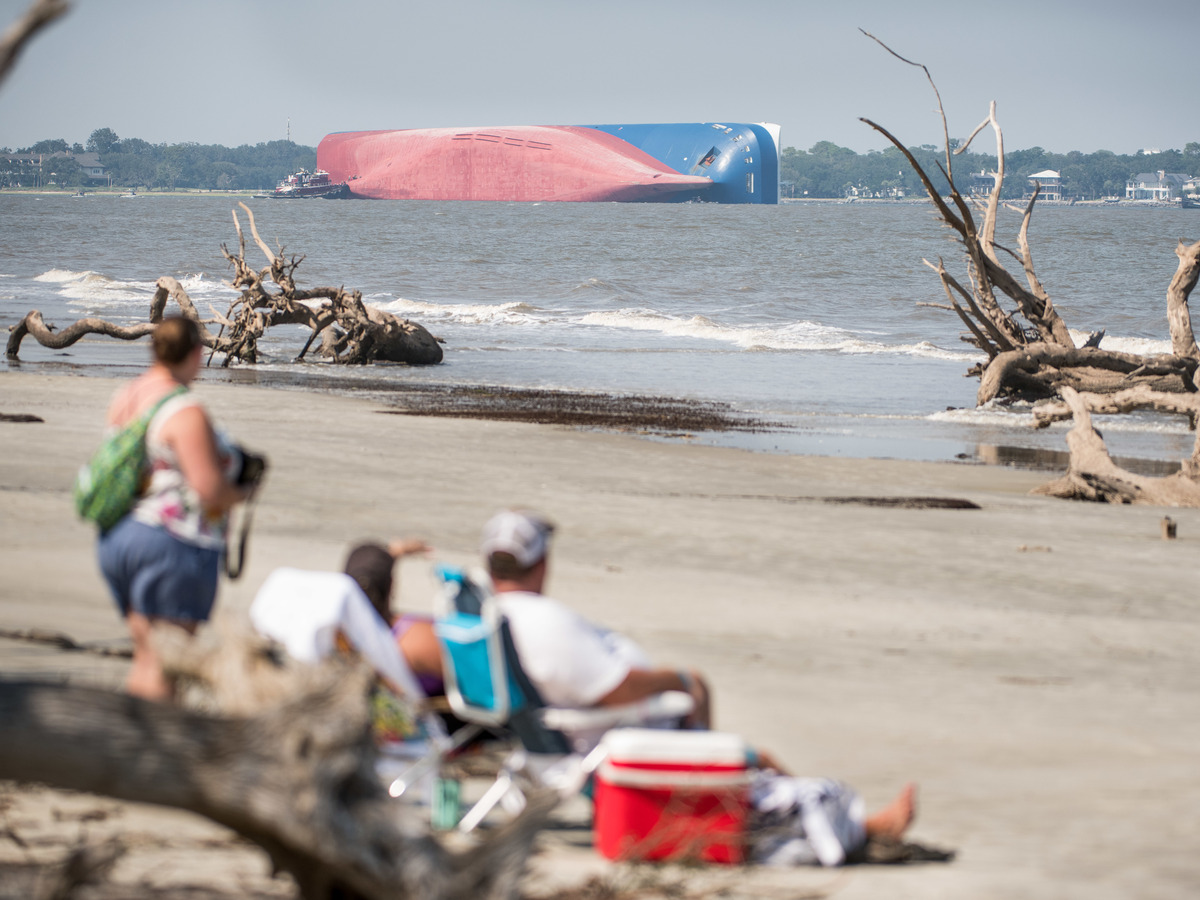 The view from the mainland in coastal Georgia is mostly miles of salt marsh and barrier islands, shore birds hunting in the mud, shrimp boats traveling the Intracoastal Waterway.

Since September, from the coastal city of Brunswick, the view has also featured the Golden Ray.

The cargo ship capsized as it was leaving the Port of Brunswick, heading for Baltimore with 4,200 new cars on board. The cause is still under investigation.

Now, crews are beginning work to eventually remove the ship, but getting rid of such a giant wreck is complicated.

From Brunswick, the 656-ft. Golden Ray is a big dark hump near the horizon. From nearby bridges and islands, the red, white and blue ship is even more visible. It’s resting on its side offshore, partially submerged.

“You just can’t get away from it,” said Susan Inman, coastkeeper with the local environmental organization, Altamaha Riverkeeper.

It’s just really big, which means getting it out of the St. Simons Sound is a big job.

The plan to dismantle the wreck is to use a giant chain to slice the cargo ship into eight segments, lift those giant pieces up out of the water, then take them away on a barge.

At a recent community meeting, curious residents like Bill Bulfer were generally impressed.

This wreck is unprecedented in the United States, according to the U.S. Coast Guard, which is coordinating the recovery. That’s why it’s still there after almost six months, the agency said.

As wild as the plan to slice the ship like a gigantic, semi-submerged loaf of bread might sound, it has been done before in other places with car carriers, and also on part of the Russian submarine, Kursk.

“It’s not all that unusual,” said Richard Burke, professor of marine engineering and naval architecture at the Maritime College of the State University of New York. 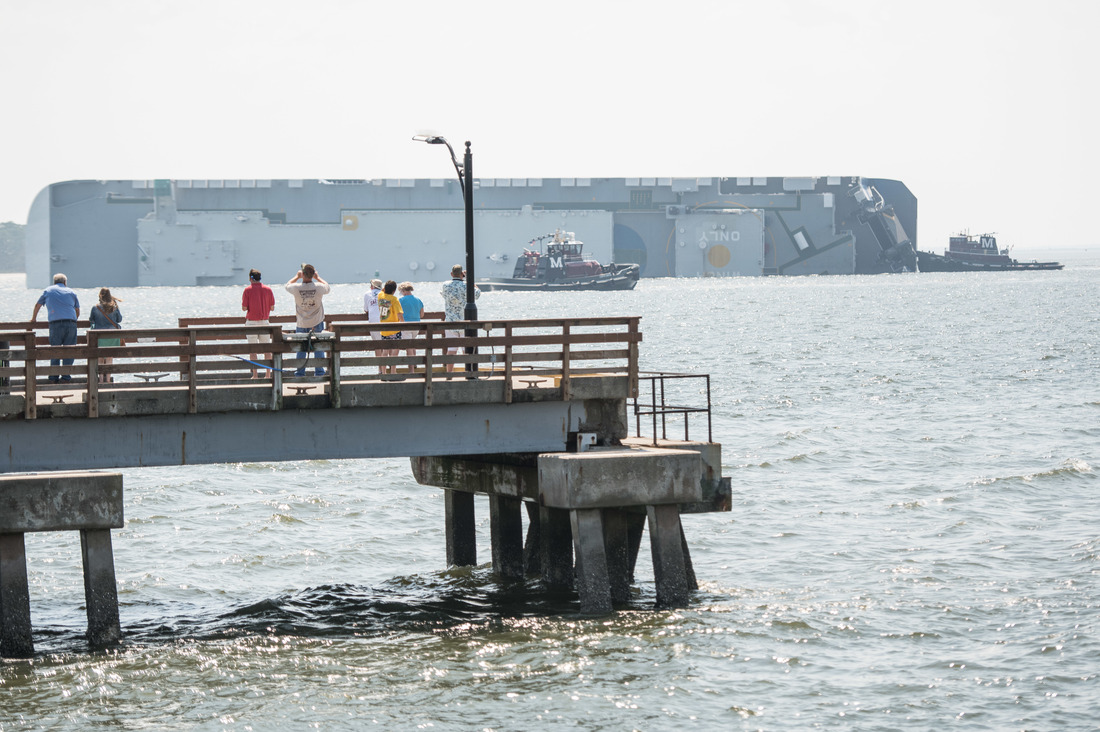 The 656-ft. vehicle carrier left the Port of Brunswick, a fire broke out on board and the ship capsized in St. Simons Sound. 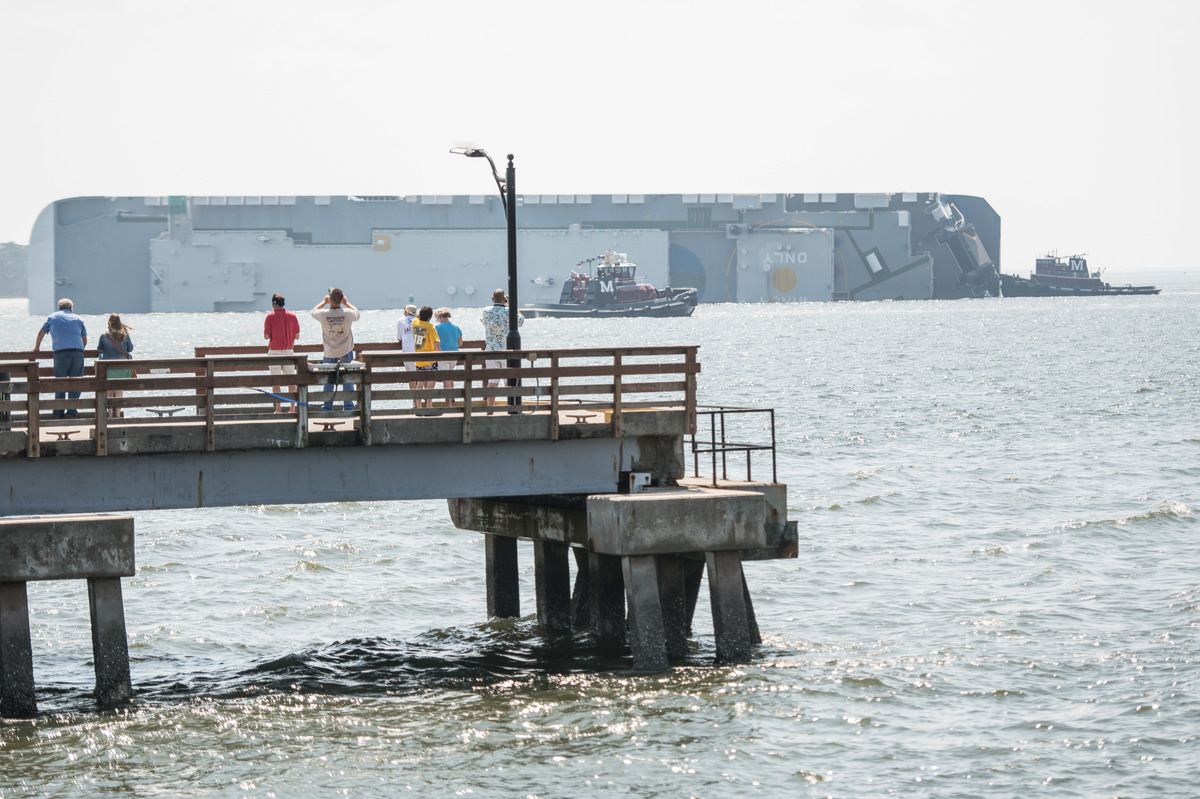 The 656-ft. vehicle carrier left the Port of Brunswick, a fire broke out on board and the ship capsized in St. Simons Sound.

Every wreck is different with its own set of challenges. With the Golden Ray, “there are a number of things you have to worry about,” he said. “First of all, the ship has — now the remains of – 4,200 vehicles.”

So it’s not just getting the ship itself out of the sound, it’s also all the cars, with their fuel and batteries and oil.

Other things that make things complicated include that the ship is on its side, and that there are strong tides and currents in the area, according to the salvage company removing the wreck.

Workers are building a barrier around the Golden Ray that’s meant to soak up oil and catch debris — and cars — once the actual slicing starts.

“My main concern is the biggest part of this operation is coming up,” said Inman. She said she’s worried that cutting the ship into big pieces is going to make a mess near sensitive coastal ecosystems.

And the original salvage company working on the Golden Ray is now suing the Coast Guard in federal court. It claims it was a violation of federal law that it lost the contract to remove the wreck, and that the current plan is environmentally risky.

Still, at least so far, it could have been worse, said Doug Haymans, director of Georgia’s Coastal Resources Division. “For a disaster of this nature, we’re very fortunate,” he said.

All the ship’s crew members were rescued.

There was an oil spill, but most of the ship’s fuel was removed from its tanks.

“We could have had 300,000 gallons on our shorelines and we’ve had nowhere near that,” Haymans said.

The company working to remove the Golden Ray will begin slicing up the ship once the environmental barrier is installed, in about a month. The goal is to have it out of the St. Simons Sound before peak hurricane season this summer.