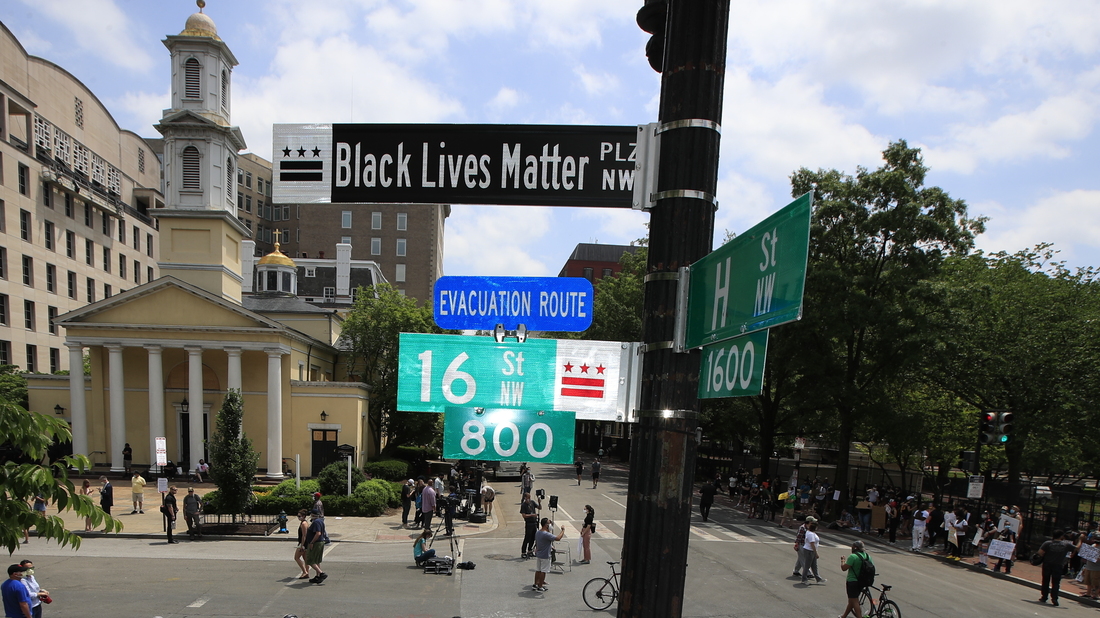 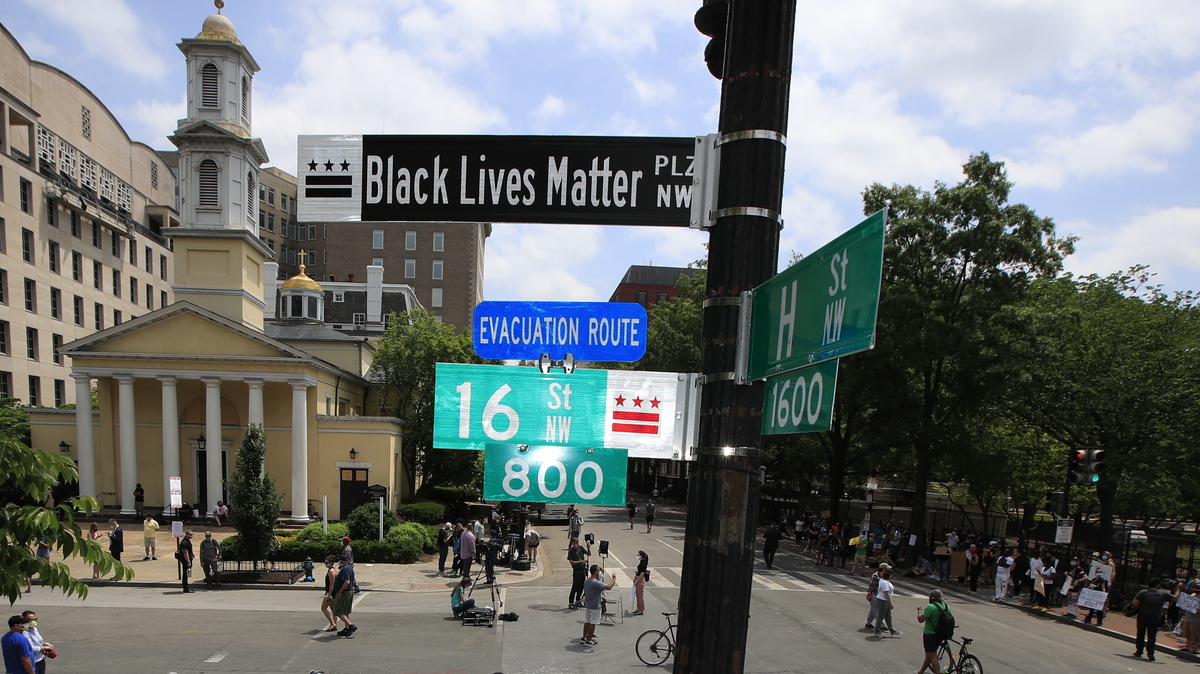 President Trump’s term in office opened with a banner hanging from a crane not too far from the White House windows, declaring “RESIST.” Now, in the final year of that term, there’s another protest slogan planted outside — only this statement, with the official backing of local leaders, is likely to stay put.

With that announcement Friday, officials installed a new street sign above the intersection outside St. John’s Church, where Trump made a controversial visit earlier this week. Police and National Guard troops forcibly removed peaceful demonstrators, spraying them with tear gas, in order to clear a path for Trump’s photo-op with a Bible at the church.

The street sign isn’t the only change. Earlier in the day, artists with MuralsDC, a Department of Public Works project, and some volunteers painted “BLACK LIVES MATTER” in yellow capital letters down a two-block stretch north of the intersection, just across Lafayette Park from the White House.

“There’s a lot of anger. There’s a lot of distrust of police in the government. There are people who are craving to be heard and to be seen and to have their humanity recognized,” Bowser said during a news conference later in the day.

“And we had the opportunity to send that message loud and clear on a very important street in our city. That message is to the American people that black lives matter, black humanity matters, and we as a city raise that up.”

The Democratic mayor, who was on hand for the street sign’s installation, has clashed publicly with the president over the proper response to the widespread protests incited by the Memorial Day killing of George Floyd, a black man who was in the custody of Minneapolis police.

Trump specifically called out Bowser last weekend on Twitter with the false claim that she had prevented the involvement of D.C. police during protests last Friday. (Local police were on the scene, Secret Service confirmed.) And just days later, the mayor condemned the use of munitions on peaceful protesters for Trump’s walk to the church, an incident she called shameful.

On Thursday, she also sent him a letter requesting the withdrawal of all extra federal law enforcement and troops from the city, noting that the additional forces “can breed dangerous confusion.”

By Friday, Army Secretary Andrew McCarthy said all 1,600 active duty military police who were brought to bases in the D.C. region, including in Virginia and Maryland, are heading back to their home bases. Separately, some 4,500 members of the National Guard who have been operating in the city will remain for now.

The decision to create a Black Lives Matter Plaza did not please the D.C. chapter of the Black Lives Matter global organization, however, which rejected the project on Twitter as merely a “performative distraction from real policy changes.”

“Bowser has consistently been on the wrong side of BLMDC history. This is to appease white liberals while ignoring our demands,” the group said. “Black Lives Matter means defund the police.”

Bowser was asked about the statement during her press briefing Friday.

“Black Lives Matter is a very critical of of police; they’re critical of me,” the mayor responded. “But that doesn’t mean that I don’t see them and support the things that will make our community safe, and that we don’t all have a larger responsibility in the nation’s capital to send that very clear message to our nation.”