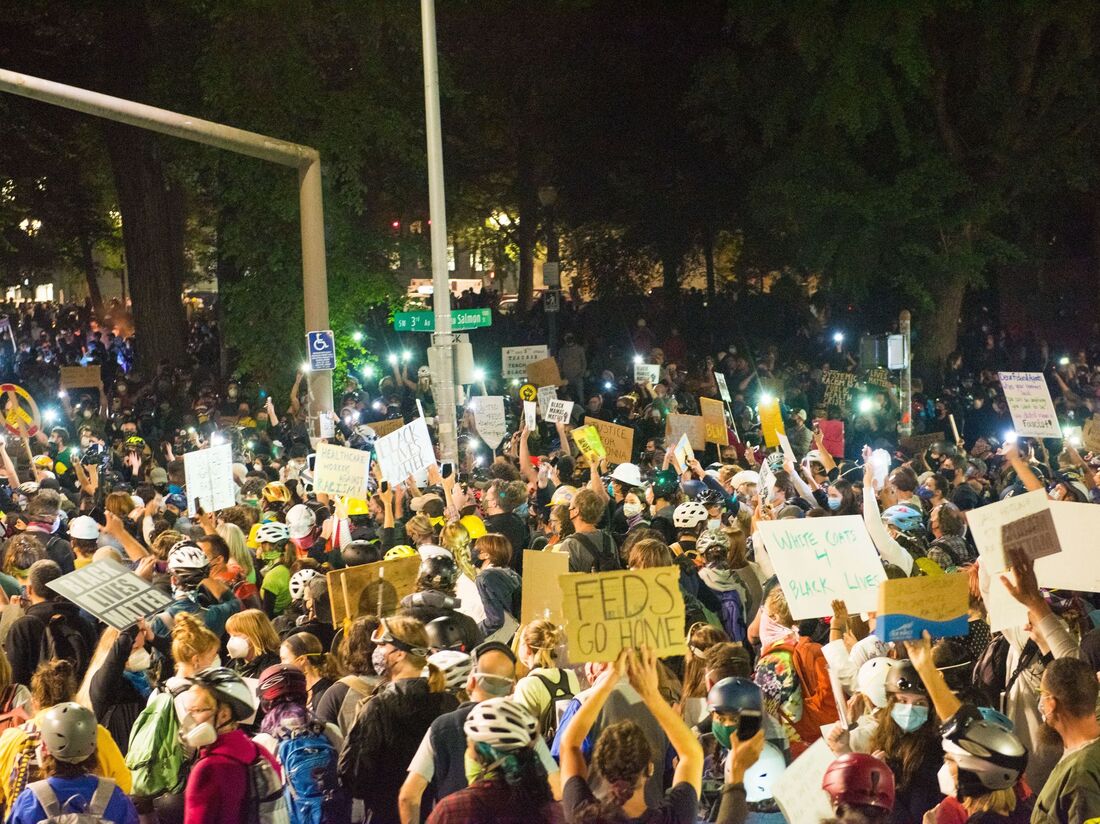 Protests in Portland, shown here on July 24, have grown increasingly heated with the presence of federal agents. On Monday, groups and individual protesters sued the federal government over its response. 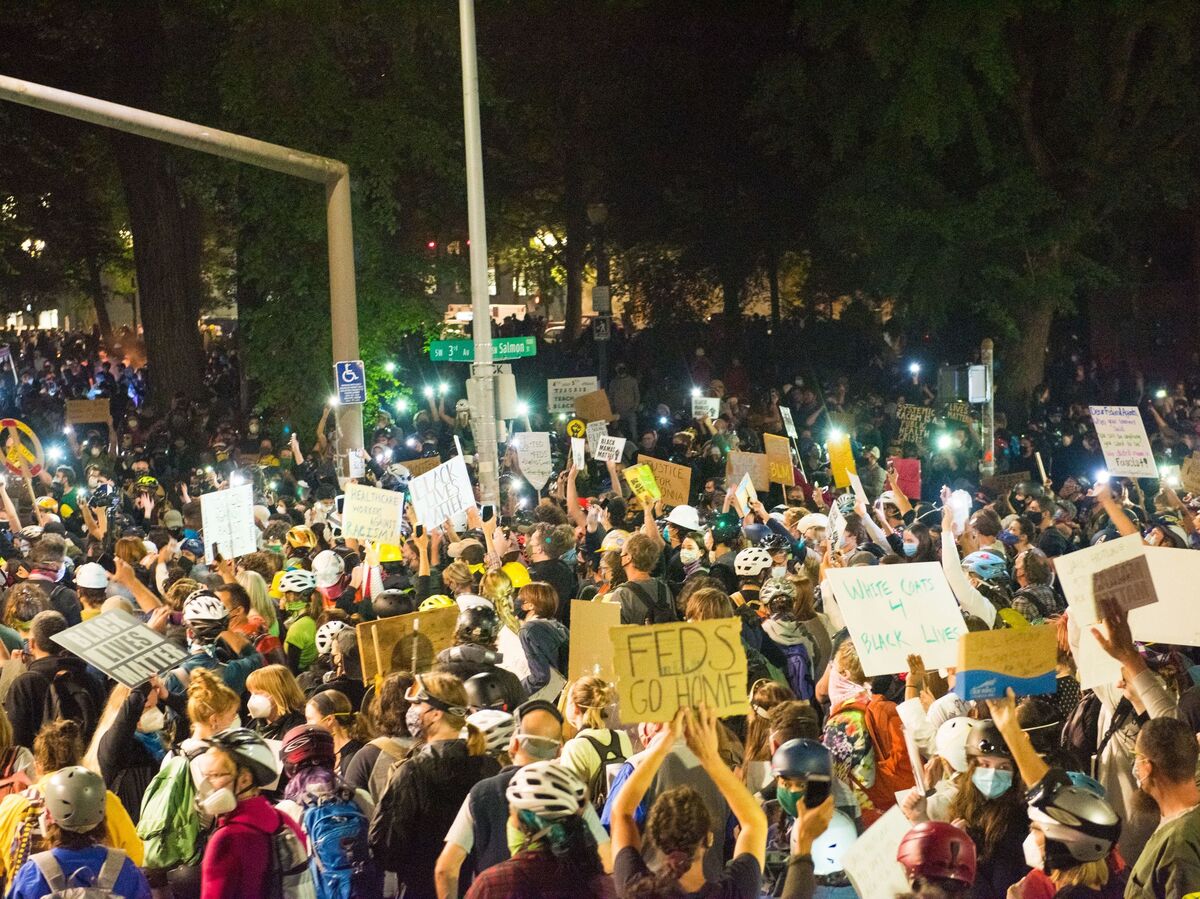 Protests in Portland, shown here on July 24, have grown increasingly heated with the presence of federal agents. On Monday, groups and individual protesters sued the federal government over its response.

Protesters including members of Wall of Moms and Don’t Shoot Portland are suing the Trump administration over what they describe as a violent and intimidating federal response to nightly demonstrations against systemic racism and police brutality.

The group of organizations and individuals filed a nine-count complaint on Monday against the U.S. Department of Homeland Security, its leaders and several other federal agencies, whom they accuse of violating protesters’ constitutionally protected freedom of speech, freedom from unreasonable seizures, and right to due process, by deploying federal agents to unlawfully “quash Plaintiffs’ speech and end their protests.”

They also argue that federal officers are overstepping their law enforcement authority, and allege that Acting Secretary of Homeland Security Chad Wolf is not legally serving in his role because he has not been nominated by President Trump or confirmed by the Senate.

The Department of Homeland Security, U.S. Immigration and Customs Enforcement and the U.S. Department of Justice did not immediately respond to NPR’s request for comment on Monday evening. A U.S. Customs and Border Protection spokesperson said the agency does not comment on pending litigation.

The lawsuit was brought in the U.S. District Court for the District of Columbia by a number of law firms and Protect Democracy, a left-leaning litigation organization. They are representing Don’t Shoot Portland, Wall of Moms and five individual Black Lives Matter protesters.

Protesters have been gathering in downtown Portland on a nightly basis since the death of George Floyd on May 25. In early July, the federal government began deploying agents to the city in order to protect federal property.

The plaintiffs allege that the conduct of those federal agents, including away from the federal courthouse they were sent to protect, suggests they were actually carrying out a different DHS policy: “to intimidate and silence protesters because of their message.”

In the complaint, they describe seeing DHS agents injure peaceful protesters, make arrests without probable cause and use otherwise violent tactics — of which the plaintiffs themselves were repeatedly on the receiving end.

“They have been tear-gassed night after night, left vomiting and unable to eat or sleep because of the toxic poison blasted at them,” the complaint reads. “They have been shot at over and over — with rubber bullets, bean bags, pepper spray, and a range of other projectiles fired at close range and with brutal effect. They have had flash-bang explosive devices detonated right in front of them. They have been forced to speak and assemble in fear of not just bodily harm, but the possibility of sudden arrest without probable cause.”

More broadly, the complaint argues that the “abusive actions” of federal agents violate legal limitations on federal law enforcement activities that allow agents to be deployed only to protect federal property.

But the plaintiffs also quote government officials as saying the agents are there to ” ‘quell’ protests against police brutality by ‘tak[ing] over’ Portland.”

“Our clients in Portland are peacefully exercising their First Amendment rights. Federal law enforcement should not be attacking these brave women for speaking up for what they believe,” said Deana El-Mallawany, counsel at Protect Democracy. “The intent of the administration’s deployment of federal agents in Portland appears to be to stifle speech the president doesn’t like. It’s important to check this unlawful administration policy now, before it is allowed to spread to other cities across the U.S.”

In a statement on Monday, the DHS described a “dangerous and vicious situation” in Portland, with rioters trying to remove additional fencing that the agency had erected around the Hatfield Federal Courthouse last week.

It said that when federal officers left the courthouse to defend the fence, “rioters responded with hard projectiles, mortar style fireworks and lasers that can cause permanent blindness.”

The department said officers made 10 arrests, nine for assault of a federal officer and one for violating a no-fly zone with a drone.

State and local officials say the federal agents’ presence has shifted the conversation and exacerbated tensions, and are increasingly calling for their removal.

Portland Mayor Ted Wheeler, who was tear gassed in a crowd last week, was one of six mayors who penned a letter on Monday asking Congress to pass legislation to block the Trump administration from deploying federal law enforcement to cities without local leaders’ consent.

Other entities in Oregon have explored legal avenues for restricting the actions of federal agents.