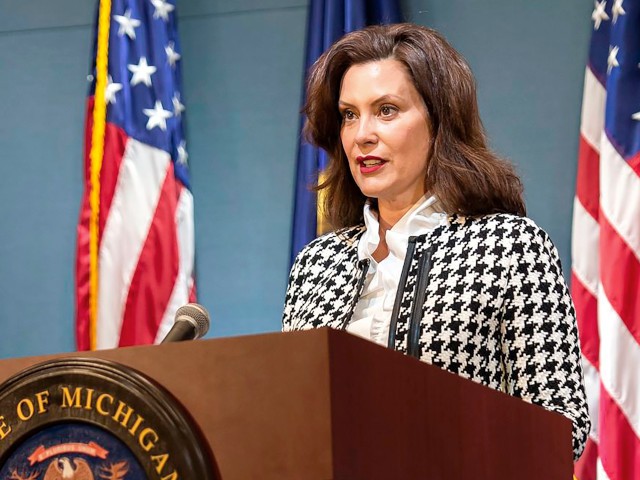 Michigan Governor Gretchen Whitmer (D) claimed, without evidence, on Tuesday that she has seen shutdown protesters carrying “automatic rifles” outside her house.

Whitmer held a press conference to address allegations that her husband had asked for preferential treatment to get his boat in the water before the holiday weekend. She said he “joked” with the business, asking if his wife’s position could get this bumped up the line for service.

She said her husband regretted making the joke and she regrets that he made it, as well.

After addressing her husband’s statements, Whitmer said, “My family has had men with automatic rifles standing in view of our front window outside our home.”

She did not say how she ascertained that the guns were “automatic” or whether she was referring to them as such because other Democrats have used the words “automatic” and “semiautomatic” interchangeably. The distinction is not trivial; an automatic firearm, such as an M4, shoots multiple rounds with one pull of the trigger while a civilian firearm, such as an AR-15, shoots only one round per trigger pull.

On June 17, 2014, Breitbart News reported Hillary Clinton claiming that we need more laws to stop people from entering schools “with an automatic weapon” and committing heinous acts. She did not cite a single example of an “automatic weapon” being used in a school shooting, but she did mention that horrid December 14, 2012, attack on Sandy Hook Elementary School.