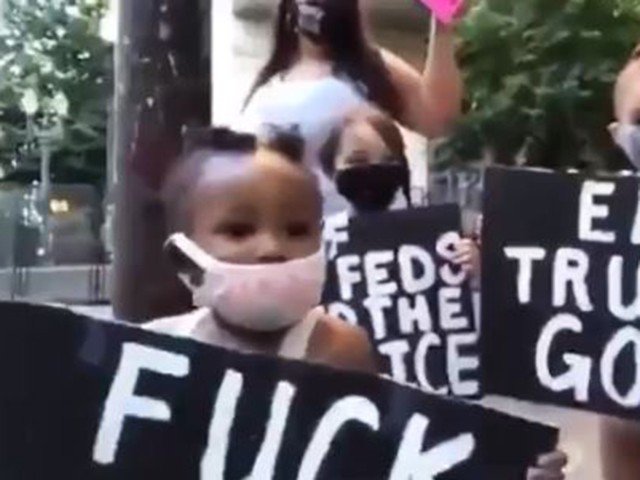 Adults in Portland appeared to have toddlers hold anti-cop signs and repeat “fuck the police” for a bystander recording the moment, as the city continues to descend into chaos on a nightly basis.

Journalist Andy Ngo, who has firsthand experience with violent Antifa rioters in Portland, shared a video on social media showing a group of adults walking with toddlers, who were holding anti-cop signs reading “Fuck the Police” and “Eff Trump’s Goons.”

“Show them your sign. Say, ‘Fuck the Police,’” an adult in the background told the children, who innocently repeated the phrase:

Toddlers and very young children are marched outside the Portland federal courthouse. They carry signs and say, “F— the police” on cue from the adults. One toddler does the black power fist. #BlackLivesMatter pic.twitter.com/Xr4ubMrKZs

“Protesters” in Portland coaching their small children to say “f*ck the police” and makes them carry signs with that & other very classy slogans 😳 pic.twitter.com/tyLlvPP8mg

These parents should be ashamed of themselves. https://t.co/KbeI3w0JkN

Portland saw another night of violence on Thursday evening after a crowd of over 1,000 gathered outside of the Justice Center and Federal Courthouse. According to a statement from the Portland Police Bureau (PPB), several protesters set fires within the fence that surrounds the courthouse and breached the area, prompting a response from federal law enforcement.

“As Federal Police Officers dispersed the group they were hit with large projectiles, various incendiaries, and flashed with lasers,” the PPB stated:

While Portland police did not engage with the demonstrators directly, they declared a riot shortly before 2 a.m.:

The activity outside of the Federal Courthouse has been deemed an unlawful assembly. Disperse to the north and/or west. Disperse immediately. Failure to adhere to this order may subject you to arrest or citation, or riot control agents, including tear gas and/or impact weapons.

However, “many people stayed in the area and continued to light fires, and destruct federal courthouse property,” according to PPB:

More war-like scenes in downtown Portland as rioters clash with federal law enforcement outside the federal courthouse. They are using leaf blowers to blow tear gas away so they can more quickly regroup. Video by @RichieMcGinniss. #PortlandRiots #antifa pic.twitter.com/ots8UNtY3j

Federal officers push back at rioters in Portland after they lit several fires, launched fireworks at the courthouse, threw projectiles at officers, climbed the barricade, and show high powered lasers in the eyes of officers pic.twitter.com/PRj1b37DEN

More context for those who will try to say I’m lying about what happened as they always do when my footage doesn’t agree with their narrative pic.twitter.com/4UpbPZVki8

Federal law enforcement vs rioters outside the Portland federal courthouse. They came out after rioters launched fireworks at the building and set fires all around the inside of the barrier. #PortlandRiots #antifa Video by @ElijahSchaffer: pic.twitter.com/BjnH36xvcr

Peaceful protesters break into courthouse to expand the fire

Despite the use of pepper bullets the agitators are not phased

They do this while yelling “George Floyd” pic.twitter.com/y6rru5cdlA

Feds put out fire. But right as they left rioters started a new one that’s even bigger than this one

How is this the Feds instigating violence? It all seems to be well planned and the MSM is in on it

Where’s this footage on the major networks daily?

Rioters go inside the barrier protecting the Portland federal courthouse and fan the flames of the fire they started. #PortlandRiots. Video by @VenturaReport: pic.twitter.com/o5QCN8nXWx

PPB, which has been barred by the Portland City Council from cooperating with federal law enforcement, did not engage with the crowd nor make any arrests.

Portland Commissioner Jo Ann Hardesty recently made waves after telling Marie Claire that she believes officers are “starting the fires themselves” to justify “attacking community members.”